OOPS! What Do You Do When You Make a Wrong Decision? 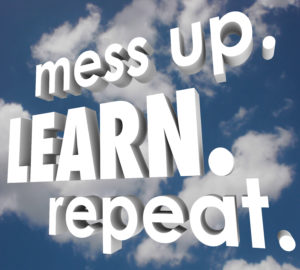 As a general rule, we human beings love having freedom of choice. And for those of us fortunate enough to live in a free society, that means that we have the political freedom to vote for the candidates of our choice.

We also have freedom of religion (or no religion), freedom to choose our profession or to start a business; and freedom to set our own goals and to live pretty much according to our own preferences.

The inescapable corollary of the freedom to make choices is that those choices inevitably require us to make decisions if we are to have any hope of living a life of meaning and value.

Somehow the word choice is a lot more appealing to us than the word decision. Choice is a word that expresses the joy of freedom; while decision carries with it the burden of responsibility.

What if we make a wrong decision? That fear sometimes prevents us from making any decision at all (which, of course, is also a decision).

The reality is that sometime or another, we are going to make some decisions that do not create the results we had hoped they would. Periodically making the wrong decision is the price we pay for the blessing of having freedom of choice.

This brings us to a vitally important decision: how we choose to respond when we make a bad decision.

Unfortunately, the four most difficult words to pronounce in the English language often seem to be I made a mistake. We live in a society that has made an art of the blame game. But as my sister Marsha wisely observes: When you point one finger at someone else, there are three more fingers pointing back at you.

Admitting when we make a mistake is not only the mature path to take; it is also the surest path to forgiveness from anyone who may have been affected negatively by our mistake. (This is especially true since so few people seem to be able to admit to making a mistake.)

From a more positive and hopeful perspective, it is my firm belief that every mistake has in it an important lesson for us to learn, if only we can stop beating up on ourselves for making it in the first place.

Instead of viewing a particular decision as a mistake, it is much more powerful to view it as giving us the opportunity to either figure out a way to improve what we were working on or eliminate something that does not work. Then we are free to try something else in its place; because, at the end of the day, the only true failure is giving up.

Perhaps most importantly, we need to forgive ourselves for being human. Since we do not currently live in a messianic age, expecting perfection of ourselves is not only unrealistic and counter-productive, it is painful to live with the negative self-talk that is a common result of perfectionism.

It is far better to heed the hard-won wisdom of a woman who has led a famously difficult life, and who has obviously come to some kind of peace with her human condition. We are not meant to be perfect; we are meant to be whole, Jane Fonda.