A Mistake in the Right Direction 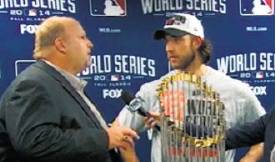 Sometimes mucking up a speech can turn out to be what my husband Saul calls a mistake in the right direction.

As unbelievable as it seems, a major blooper in a speech can actually end up creating a positive result that is almost beyond the realm of imagination.

Such a result occurred when Chevrolet’s Kansas City zone manager Rikk Wilde mucked up his presentation of a 2015 Chevrolet Colorado to Madison Bumgarner of the Giants, the World Series’ Most Valuable Player of that year.

The idea was to get some positive publicity for the Chevrolet brand by making this presentation.

No doubt Wilde felt terrible about his gaffe, but he actually ended up providing his brand with a huge boatload of publicity it would have gotten in no other way.

That’s because his gaffe seemed to tickle a lot of people’s funny bones and it quickly became a Twitter sensation and went viral.

According to Front Row Analytics, Wilde appears to have garnered millions of dollars worth of media exposure from his gaffe; which was at least six times more than the $392,000 value GM would have gotten with a standard performance. And the chevrolet.com website saw a 70% hike in visitors as well.

The truth is that polished performances can be very impressive and very effective; but our humanity that shows through when we goof can truly endear us to our audiences and make our message far more memorable and magnetizing than we could ever imagine.

As proof of this, the front page sub-headline of The Detroit Free Press on October 31 of that year read: GM turns exec’s bumbling performance at the World Series into a PR victory. (The headline reads: @EVERYONE: LEAVE #CHEVYGUY ALONE.)

So when you start worrying about making a speech, keep in mind my husband’s words of wisdom: sometimes a mistake can take you in the right direction.

Please share with me if my oddball view of public speaking gaffes has been helpful in reducing your own concerns about possibly mucking up your own presentations and speeches.